First Peoples Of The Caribbean

Columbus first landed on the southeast of the Bahamas Islands called the Lucayos or (Leeward Islets) by the Spanish. Long before his arrival, those islands were known as Guanahaní by the native Arawakan-speaking Taino who were the first group to meet Columbus and his crew. 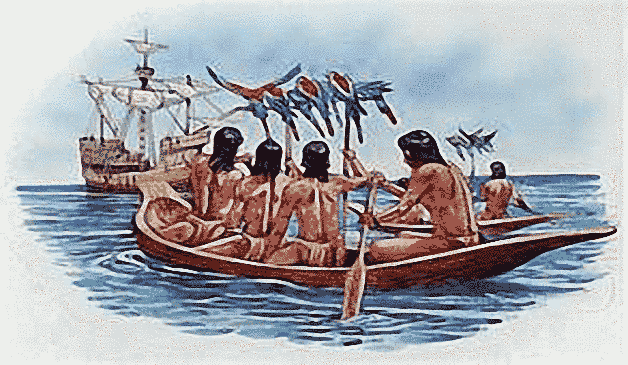 The Taino (Arawaks) were grouped in large communities mainly in Cuba, Jamaica, Hispaniola (Haiti and the Dominican Republic), Puerto Rico and parts of the southern Windward islands. Ciboney,(Siboney) tribal groups who also lived in (Isla de Beimenhi) Florida, inhabited the western part of the Bahamas when Columbus arrived.

They are said to be the first group of people to arrive in the caribbean region and settled in the eastern parts of Cuba, the Bahamaian islands, Leeward islands, US and British Virgin islands. The three main indigenous groups of inhabitants were the Ciboney (Guanahuatebey) or stone people, the Taino (Arawak), a rain forest agricultual people and the sea-fearing Caribs of the reefs and forest wetlands.

The Tainos' ancestors began settling on this island as early as 6,000 to 4,000 B.C.-8,000 years ago!--arriving in canoes from today's Yucatan and Belize in Central America, going first east to Cuba, then southeast to Hispaniola, which Native peoples called Quisqueya, HaitA, or BohA­o. Who are the tianos?

Later groups arrived from northern South America, primarily from the Orinoco and Amazon River valleys and the Caribbean coast of today's Venezuela, canoeing northwestward from Trinidad and Tobago, up the chain of islands to Puerto Rico and Hispaniola.

There were at least four different "waves" of Native peoples who came here, all of whom eventually merged to become Tainos, which is what we call the Natives who were living here when the Spaniards arrived in 1492, though they used to be called Island Arawak because their language is based on Arawakan from South America.

The TaA­no sent out colonies to Jamaica, eastern Cuba, and today's Bahamas. We know more about the TaÃ­nos' culture than about their ancestors' culture, but the TaA­nos' spiritual ideas obviously developed from those of their early ancestors-a blend of ideas from several regions of the Americas. Caves played an important role in their spiritual beliefs and customs, in part, perhaps, because this island has so very many caves.

Read more about the arrival of the first peoples, Amerindians settlement in the Caribbean, and the history of the Arawak And Carib indians of the leeward Islands 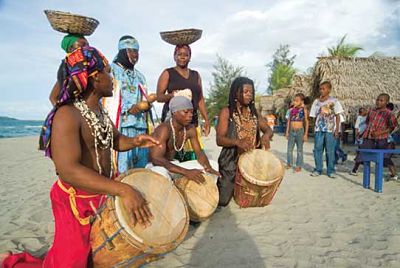